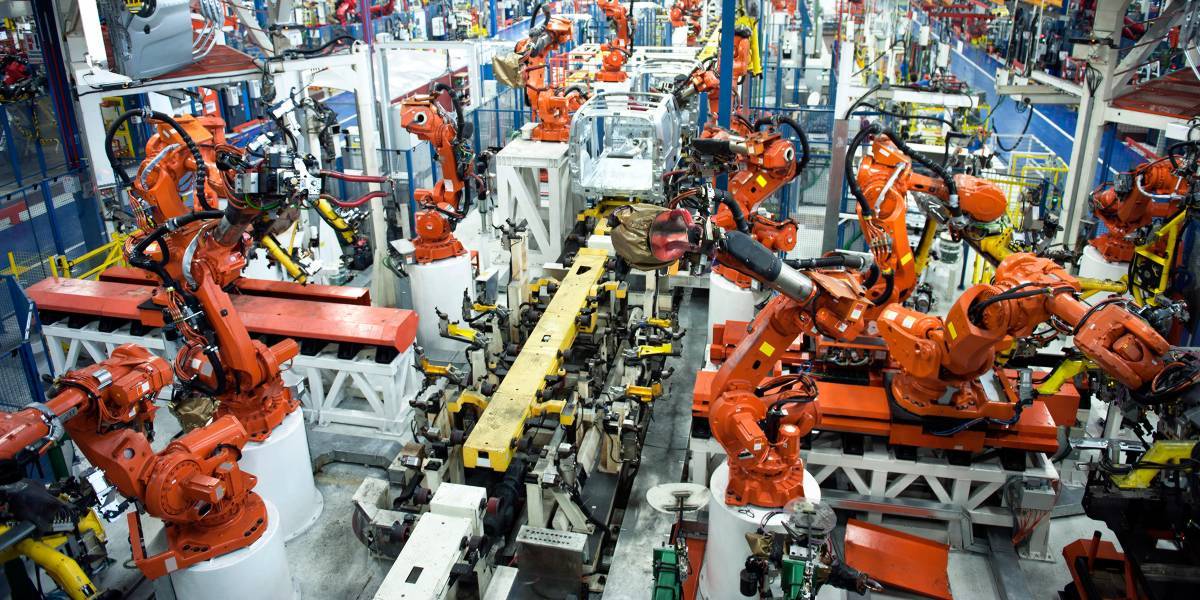 Ransomware has taken the world by storm, and IT is not the only technology affected. Operational Technology (OT), which is increasingly blending with IT, is also susceptible to ransomware tactics, techniques, and procedures (TTPs). And when ransomware strikes OT, the effects have the potential to be devastating.

Here, we will look at a ransomware attack that spread from IT to OT systems. The attack was detected by Darktrace AI.

This threat find demonstrates a use case of Darktrace’s technology that delivers immense value to organizations with OT: spotting and stopping ransomware at its earliest stages, before the damage is done. This is particularly helpful for organizations with interconnected enterprise and industrial environments, as it means:

Darktrace recently identified an aggressive attack targeting an OT R&D investment firm in EMEA. The attack originally started as a crypto-mining campaign and later evolved into ransomware. This organization deployed Darktrace in a digital estate containing both IT and OT assets that spanned over 3,000 devices.

If the organization had deployed Darktrace’s Autonomous Response technology in active mode, this threat would have been stopped in its earliest stages. Even in the absence of Autonomous Response, however, mere human attention would have stopped this attack’s progression. Darktrace’s Self-Learning AI gave clear indications of an ongoing compromise in the month prior to the detonation of ransomware. In this case, however, the security team was not monitoring Darktrace’s interface, and so the attack was allowed to proceed.

This threat find will focus on the attack techniques used to take over two OT devices, specifically, a HMI (human machine interface), and an ICS Historian used to collect and log industrial data. These OT devices were both VMware virtual machines running Windows OS, and were compromised as part of a wider Conti ransomware infection. Both devices were being used primarily within an industrial control system (ICS), running a popular ICS software package and making regular connections to an industrial cloud platform.

These devices were thus part of an ICSaaS (ICS-as-a-Service) environment, using virtualised and Cloud platforms to run analytics, update threat intelligence, and control the industrial process. As previously highlighted by Darktrace, the convergence of cloud and ICS increases a network’s attack surface and amplifies cyber risk.

The initial infection of the OT devices occurred when a compromised Domain Controller (DC) made unusual Active Directory requests. The devices made subsequent DCE-RPC binds for epmapper, often used by attackers for command execution, and lsarpc, used by attackers to abuse authentication policies and escalate privileges.

The payload was delivered when the OT devices used SMB to connect to the sysvol folder on the DC and read a malicious executable file, called SetupPrep.exe.

Figure 1: Darktrace model breaches across the whole network from initial infection on October 21 to the detonation on November 15.

Figure 2: ICS reads on the HMI in the lead up, during, and following detonation of the ransomware.

The malicious payload remained dormant on the OT devices for three weeks. It seems the attacker used the time to install crypto-mining malware elsewhere on the network and consolidate their foothold.

On the day the ransomware detonated, the attacker used remote management tools to initiate encryption. The PSEXEC tool was used on an infected server (separate from the original DC) to remotely execute malicious .dll files on the compromised OT devices.

The devices then attempted to make command and control (C2) connections to rare external endpoints using suspicious ports. Like in many ICS networks, sufficient network segregation had been implemented to prevent the HMI device from making successful connections to the Internet and the C2 communications failed. But worryingly, the failed C2 did not prevent the attack from proceeding or the ransomware from detonating.

The Historian device made successful C2 connections to around 40 unique external endpoints. Darktrace detected beaconing-type behavior over suspicious TCP/SSL ports including 465, 995, 2078, and 2222. The connections were made to rare destination IP addresses that did not specify the Server Name Indication (SNI) extension hostname and used self-signed and/or expired SSL certificates.

Both devices enumerated network SMB shares and wrote suspicious shell scripts to network servers. Finally, the devices used SMB to encrypt files stored in network shares, adding a file extension which is likely to be unique to this victim and which will be called ABCXX for the purpose of this blog. Most encrypted files were uploaded to the folder in which the file was originally located, but in some instances were moved to the images folder.

During the encryption, the device was using the machine account to authenticate SMB sessions. This is in contrast to other ransomware incidents that Darktrace has observed, in which admin or service accounts are compromised and abused by the attacker. It is possible that in this instance the attacker was able to use ‘Living off the Land’ techniques (for example the use of lsarpc pipe) to give the machine account admin privileges.

Examples of files being encrypted and moved:

Upon detonation, the ransomware note readme.txt was written by the ICS to targeted devices as part of the encryption activity.

The final model breached by the device was “Unresponsive ICS Device” as the device either stopped working due to the effects of the ransomware, or was removed from the network.

How the attack bypassed the rest of the security stack

In this threat find, there were a number of factors which resulted in the OT devices becoming compromised.

The first is IT/OT convergence. The ICS network was insufficiently segregated from the corporate network. This means that devices could be accessed by the compromised DC during the lateral movement stage of the attack. As OT becomes more reliant on IT, ensuring sufficient segregation is in place, or that an attacker can not circumvent such segregation, is becoming an ever increasing challenge for security teams.

Another reason is that the attacker used attack methods which leverage Living off the Land techniques to compromise devices with no discrimination as to whether they were part of an IT or OT network. Many of the machines used to operate ICS networks, including the devices highlighted here, rely on operating systems vulnerable to the kinds of TTPs observed here and that are regularly employed by ransomware groups.

Darktrace’s Cyber AI Analyst was able to stitch together many disparate forms of unusual activity across the compromised devices to give a clear security narrative containing details of the attack. The incident report for the Historian server is shown below. This provides a clear illustration of how Cyber AI Analyst can close any skills or communication gap between IT and OT specialists.

In total, the attacker’s dwell time within the digital estate was 25 days. Unfortunately, it lead to disruption to operational technology, file encryption and financial loss. Altogether, 36 devices were crypto-mining for over 20 days – followed by nearly 100 devices (IT and OT) becoming encrypted following the detonation of the ransomware.

If it were active, Autonomous Response would have neutralized this activity, containing the damage before it could escalate into crisis. Darktrace’s Self-Learning AI gave clear indications of an ongoing compromise in the month prior to the detonation of ransomware, and so any degree of human attention toward Darktrace’s revelations would have stopped the attack.

Autonomous Response is highly configurable, and so, in industrial environments — whether air-gapped OT or converged IT/OT ecosystems — Antigena can be deployed in a variety of manners. In human confirmation mode, human operators need to give the green light before the AI takes action. Antigena can also be deployed only in the higher levels of the Purdue model, or the “IT in OT,” protecting the core assets from fast-moving attacks like ransomware.

ICS networks are often operated by machines that rely on operating systems which can be affected by TTPs regularly employed by ransomware groups — that is, TTPs such as Living off the Land, which do not discriminate between IT and OT.

The threat that ransomware poses to organizations with OT, including critical infrastructure, is so severe that the Cyber Infrastructure and Security Agency (CISA) released a fact sheet concerning these threats in the summer of 2021, noting the risk that IT attacks pose to OT networks:

“OT components are often connected to information technology (IT) networks, providing a path for cyber actors to pivot from IT to OT networks… As demonstrated by recent cyber incidents, intrusions affecting IT networks can also affect critical operational processes even if the intrusion does not directly impact an OT network.”

Major ransomware attacks against the Colonial Pipeline and JBS Foods demonstrate the potential for ransomware affecting OT to cause severe economic disruption on a national and international scale. And ransomware can wreak havoc on OT systems regardless of whether they directly target OT systems.

As industrial environments continue to converge and evolve — be they IT/OT, ICSaaS, or simply poorly segregated legacy systems — Darktrace stands ready to contain attacks before the damage is done. It is time for organizations with industrial environments to take the quantum leap forward that Darktrace’s Self-Learning AI is uniquely positioned to provide.

Thanks to Darktrace analysts Ash Brice and Andras Balogh for their insights on the above threat find.

Discover more on how Darktrace protects OT environments from ransomware

HMI in chronological order at time of detonation:

Oakley is a technical expert with 5 years’ experience as a Cyber Analyst. After leading a team of Cyber Analysts at the Cambridge headquarters, he relocated to New Zealand and now oversees the defense of critical infrastructure and industrial control systems across the APAC region. His research into cyber-physical security has been published by Cyber Security journals and CISA. Oakley is GIAC certified in Response and Industrial Defense (GRID), and has a Doctorate (PhD) from the University of Oxford.